It's Official  South Africa Data Prices Are Too High 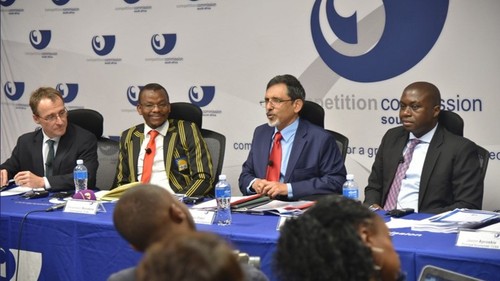 South Africa's Competition Commission has concluded, to nobody's surprise, that mobile data tariffs in the country are too high.

The competition watchdog published the provisional findings of its inquiry into data prices in the country, which showed South Africans are paying more for their data than many countries, with the large operators particularly culpable.

A few days ago, the Competition Commission (CompCom) announced the provisional report from the ongoing Data Services Market Inquiry. The project started in August 2017 at the request by the Minister of Economic Development after the public had repeatedly lodged complaints about the high price of data in South Africa. The CompCom duly announced on Twitter that a press conference had been held and the report was published on April 24.

The initial findings of the inquiry are shared with the media.

After benchmarking South Africa's data prices with other countries using research data from the ITU, Tarifica, ICASA and Research ICT Africa, the inquiry found that South Africa's data prices fared rather well for contract/postpaid users but is comparatively high for pre-paid users. The ITU's 2016 research put South Africa in 34th place among 46 African countries, with 500 Mbytes of data on a prepaid deal in South Africa costing seven times more than for the same package in Cape Verde, where the average cost was the lowest. 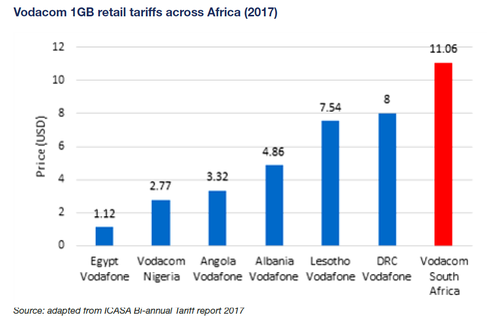 The variable cost of mobile data across the Vodacom/Vodafone empire.

How MTN charges for data across different markets.

Through benchmarking, the CompCom Inquiry has also found out what it calls "anti-poor pricing structures" -- the smaller the prepaid data package, the higher the cost per Mbyte of data, and those buying smaller prepaid data packages are normally lower income consumers. As a result, the CompCom found, "while usage amongst post-paid subscribers is growing materially, usage for pre-paid subscribers is relatively flat by comparison. This suggests that pricing is limiting the ability of lower income subscribers to make greater use of data services, which in turn restricts the benefits of the digital economy to this class of consumer."

The operators have also recognised the gap between postpaid and prepaid data prices. Rob Shuter, the CEO of MTN, told attendees at the AfricaCom 2018 event about the same thing when he said the average cost of mobile data in Africa is not very high, about $3 per Gbyte, but the offers for PAYG packages are extremely expensive, which is prohibitive for the majority of mobile users in Africa who are using pre-paid services.

The fact that the inquiry was sometimes citing historical tariffs has been seized upon by the operators. Vodacom said in a statement emailed to the media that "as part of its ongoing pricing transformation strategy to address the cost-to-communicate in South Africa, we have reduced the effective cost of data by 34% in the past calendar year alone," noted Bloomberg. MTN also highlighted that "much has changed in the mobile-data pricing sector in the past 18 months. The Commission's studies appear to have largely relied on data from 2017 which will not consider changes in 2018 and this year."

The CompCom believed two main factors have contributed to high data prices. The first is the delay in releasing spectrum, which has limited the supply side. This is definitely music to the operators' ears: "MTN is encouraged to see the Competition Commission recognizing the importance of spectrum allocation as a critical lever to facilitate the growth and health of the mobile sector," noted the operator in its statement to the media.

The second factor is the weak mandate to drive down cost and accelerate deployment of networks by competitors through passive facilities sharing, for example ducts and poles for fiber backhaul, as well as high mobile mast sites.

The CompCom has therefore recommended that, in the short term, ISACA should make more spectrum available as soon as possible, but should mandate those operators that ultimately receive the spectrum to pass on cost savings to consumers, which may also include the provision of free public Wi-Fi to give the lower income consumers the option to offload their mobile data. In the meantime, the CompCom has demanded more transparency into the operators' cost sub-structures and more price-based competition. Without the transparency, Vodacom and MTN have been able to withstand price challenges by Cell C and Telkom's attempts to drive down prices without following suit.

All stakeholders, including the mobile operators, consumer rights groups, and other market players, will have until 14 June to submit additional information and make comments on the provisional report. The final report will be published later this year.