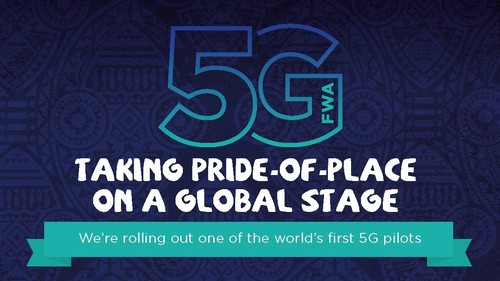 This next-generation network trial has been in the making for a while. Back in May, Comsol announced that it was working with Samsung and the US operator Verizon to bring 5G connection to South Africa. Verizon has been undertaking extensive trials of 5G fixed wireless services on the 28GHz millimeter spectrum in the US, working with Samsung, and so has been able to provide valuable insight into the process as well as further validate Samsung's 5G technology, especially as Comsol is using the same spectrum band -- it has the largest share of continuous spectrum in the 28GHz band in South Africa.

Not many details of the trial have been made public, though we do know that it delivered a download speed of 1.7 Gbit/s.

The current trial by Comsol is clearly targeted at the fixed wireless broadband use case of 5G. As Comsol's CEO Iain Stevenson said at the launch of the pilot, "This [trial] opens the doors to a new world, one where ubiquitous, high-speed networks deliver digital services to millions of citizens at low costs." Comsol plans to launch commercial 5G services in South Africa before the end of 2019, targeting enterprises and consumers alike.

However, this may well be part of Comsol's overall 5G ambition to deliver services that meet other customer needs, particularly "massive" IoT. The company is proud of the IoT infrastructure for enterprise customers it launched in 2017, which it claims to be Africa's largest low-power wide-area network (LPWAN).

Although in most parts of Africa operators are still busy rolling out 4G, or even 3G connections, in pockets of the continent 5G R&D is underway, especially in South Africa. The day before Comsol's network went live, Vodacom showcased its 5G network. The demo was set up using Huawei hardware, promoting virtual reality capabilities among other use cases, and achieved an impressively low latency of 9ms. Prior to this, in late August, Vodacom laid claim to launching Africa's first commercial 5G network in land-locked Lesotho. (See Vodacom boasts Africa's first 5G service.)

Such developments, though, are only baby steps at the start of a very long 5G journey that will require network operators to address multiple networking and operational challenges in an effort to deliver a full 5G experience. (See Piecing Together the 5G Big Picture.)