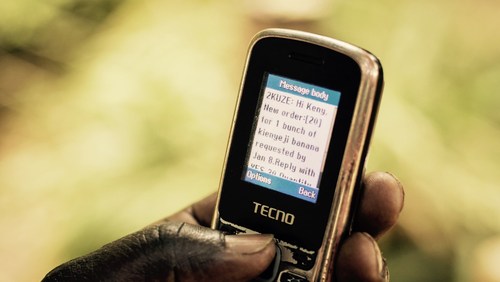 Global finance giant Mastercard has launched a mobile commerce platform in East Africa that is designed to help farmers expand and streamline their businesses by enabling them to buy, sell and receive payments for agricultural goods via their feature phones.

The platform, called 2KUVE -- which apparently means "let's grow together" in Swahili -- is being targeted at farmers in Kenya, Uganda and Tanzania.

There's a lot more information in the press release, but as you can see from the graphic, it's an interesting hybrid mix of digital and existing business processes. It's also key that this platform works on feature phones, which are growing in popularity across Africa. (See Feature Phone Popularity Surges as African Mobile Market Outgrows US.)

Below is a diagram of the 2KUZE value chain and then, below that, the full announcement from Mastercard.

NAIROBI, Kenya -- Mastercard today launched 2KUZE, a digital platform that connects smallholder farmers, agents, buyers and banks in East Africa. 2KUZE, which in Swahili means "Let's grow together," enables farmers to buy, sell and receive payments for agricultural goods via their feature phones. The platform brings the benefits and security of mobile commerce and payments to farmers in Kenya, Uganda and Tanzania.

2KUZE was developed at the Mastercard Lab for Financial Inclusion in Nairobi, which was set up in 2015 to develop practical and cost-effective financial tools that expand access and help build stable futures for more than 100 million people globally. Through an $11 million grant from the Bill & Melinda Gates Foundation, the Lab is working with East African entrepreneurs, governments and other stakeholders to develop local products rooted in the company's global knowhow.

In the initial pilot, 2KUZE is being launched in partnership with Cafédirect Producers Foundation, a non-profit organization working with 300,000 smallholder farmers globally. Currently, 2,000 small-scale farmers in Nandi Hills, Kenya are currently using the solution to sell their produce and working with farmer-friendly agents to ensure they reach the right buyers for the best price.

"Eighty percent of farmers in Africa are classified as smallholder farmers having less than 1-2 acres of farming land, making it extremely difficult to drive growth and prosperity within this community, " said Daniel Monehin, Division President for Sub-Saharan Africa and head of financial inclusion for International Markets at Mastercard.

"We believe that by using mobile, a technology that is so ubiquitous among farmers in Africa, we can improve financial access, bring in operational efficiency and facilitate faster payments. "The collaboration between the Lab team and farmers in the market helped to deliver a solution that can be implemented and make an impact without any major changes to the day-to-day."

2KUZE makes transacting much safer and simpler for all stakeholders in the agricultural supply chain -- the farmer, the buyer and the agent. Farmers using 2KUZE can conduct the entire transaction of selling produce and receiving payments via their feature phones, without having to walk for hours to the markets. This enables farmers to capture a greater percentage of the wholesale value of their goods by providing price transparency, more direct access to buyers and empowerment of farmer-friendly agents.

This solution in particular supports women farmers, who often have household duties that prevent them from leaving the farm gate and are more often subject to having to take whatever deal is given to them on the day. Digitizing these transactions in a trusted, auditable environment provides a legitimate financial footprint, opening up access to loans and other financial services, and also introducing a more efficient process that benefits the entire value chain, as well as the overall economy.

Mastercard Lab is exploring the potential for 2KUZE to help farming communities receive the right level of investment and to encourage more efficient ways of doing business with smallholder farmers.

2KUZE is one of several broad-based collaborations on which the Mastercard Lab for Financial Inclusion is working. The Lab was established in Africa to contribute to the company's global commitment to connect 500 million people to formal financial services through the use of public-private partnerships with governments, the private sector and non-governmental organizations.