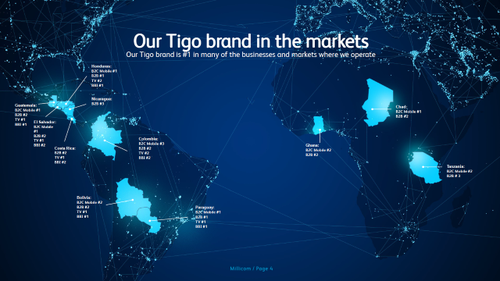 International mobile operator Millicom may not be interested in the African sector any more, having offloaded most of its business across the continent, but it still has mobile operations in Chad and Tanzania (including Zantel) and those businesses added 155,000 new customers in the three months to the end of September, according to the operator's recent third quarter earnings report.

Millicom, which is now focused on expanding its cable and mobile operations in Latin America, has nearly 15.6 million customers across those two African markets, up 9.7% from a year earlier. The vast majority, more than 12 million, are in Tanzania. More than 6.8 million of those customers use its mobile financial services, a near 16% increase from a year ago. (It also has a joint venture in Ghana but that is now regarded as a discontinued operation and is not included in any reporting -- see Bharti Airtel, Millicom Combine Operations in Ghana.)

Total revenues from the African operations, which trade under the Tigo brand, are in slight decline, though, down 0.4% year-on-year to US$131 million for the third quarter (sales were up in Tanzania but dipped badly in Chad). That decline is reflected in its average revenue per user (ARPU), which dipped by 7.7% in local currency terms, most notably in Chad where tax increases imposed earlier in the year hit spending. On aggregate, the ARPU level dipped to $2.6 per customer from $2.9 per customer.

But its earnings before interest, tax, depreciation and amortization (EBITDA) from those African operations increased by more than 12% to $38 million. And its costs are going down: Millicom invested only $8 million in capex during the quarter, down almost 42% year-on-year. So it's basically just keeping the lights on.

In the third quarter, Millicom's African operations accounted for 8.7% of group revenues and 6.7% of its earnings before interest, tax, depreciation and amortization (EBITDA).

To comply with local laws, Millicom is on course for an IPO of at least 25% of its operation IN Tanzania, a process that should get underway soon. After that it's surely only a matter of time before it offloads these remaining African assets to focus purely on Latin America.