Google, Meta cables will be 'game-changers' for Africa by Robert Clark 7/26/2022 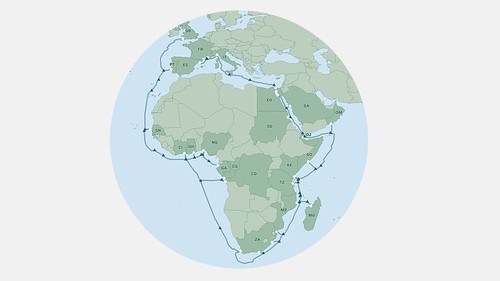 Two huge subsea cable systems planned by Meta and Google are likely to be game-changers for African telecoms, according to TeleGeography.

The continent is undergoing a mini cable boom, with eight subsea systems due to go live in the next two years.

The others, like the Peace Cable and India Europe Xpress (IEX), will land in just one or two African sites on their way to other destinations.

The two new systems now under construction by the US internet giants are their first in Africa and look set to disrupt the retail and wholesale markets.

"Those are the game-changers that people are watching," Christian told Light Reading.

Besides adding a torrent of fresh capacity, the two new players would drive competition and would also insist on open access on cable landings and backhaul.

"It's in their best interests," Christian said.

The continent is certainly ripe for another round of capacity expansion. It's had the world's fastest bandwidth growth in recent years, with a four-fold expansion from 2017-2021, according to TeleGeography numbers.

But African nations place low on the global speed rankings. Egypt and Gabon are the highest-ranked in fixed-broadband at 83rd and 89th respectively, while Togo is the highest in mobile, placing 54th.

Google's Equiano  named after 18th-century Nigerian abolitionist Olaudah Equiano  will run from Portugal to South Africa via Togo, Nigeria, St. Helena and Namibia. It has a design capacity of 144 Tbps.

Originally slated to go into service in early 2022, it is now expected to be commissioned in Q4.

In Nigeria, Africa's biggest economy, the cable is forecast to shave a fifth off retail Internet prices and increase bandwidth six-fold, according to an economic impact analysis.

Google describes it as delivering at least 20 times more bandwidth than any other African cable.

That's a hefty increment, but even so, it is set to be overshadowed by Meta's 180Tbps 2Africa system  at 45,000 km, it will be the world's longest subsea cable.

Want to know more? Sign up to get the weekly Connecting Africa newsletter direct to your inbox.

2Africa will make 46 landings and connect 33 countries, running the length of Africa's east and west coasts, and with an extension linking India, Pakistan and the Gulf states. Among the African nations, it will connect Kenya, Tanzania, South Africa, Mozambique and Nigeria.

Of course, Google and Meta are no strangers to the subsea capacity business. US internet giants  including Apple, Amazon, Microsoft and Netflix  dominate traffic on the world's major cable systems, accounting for 76% of trans-Pacific traffic and 92% on Atlantic routes.

Currently, they account for less than half of internet traffic to Africa. That is about to change.

*Top image is of the planned route of the 2Africa subsea cable. (Source: 2Africa).