SA consumers not happy with telcos 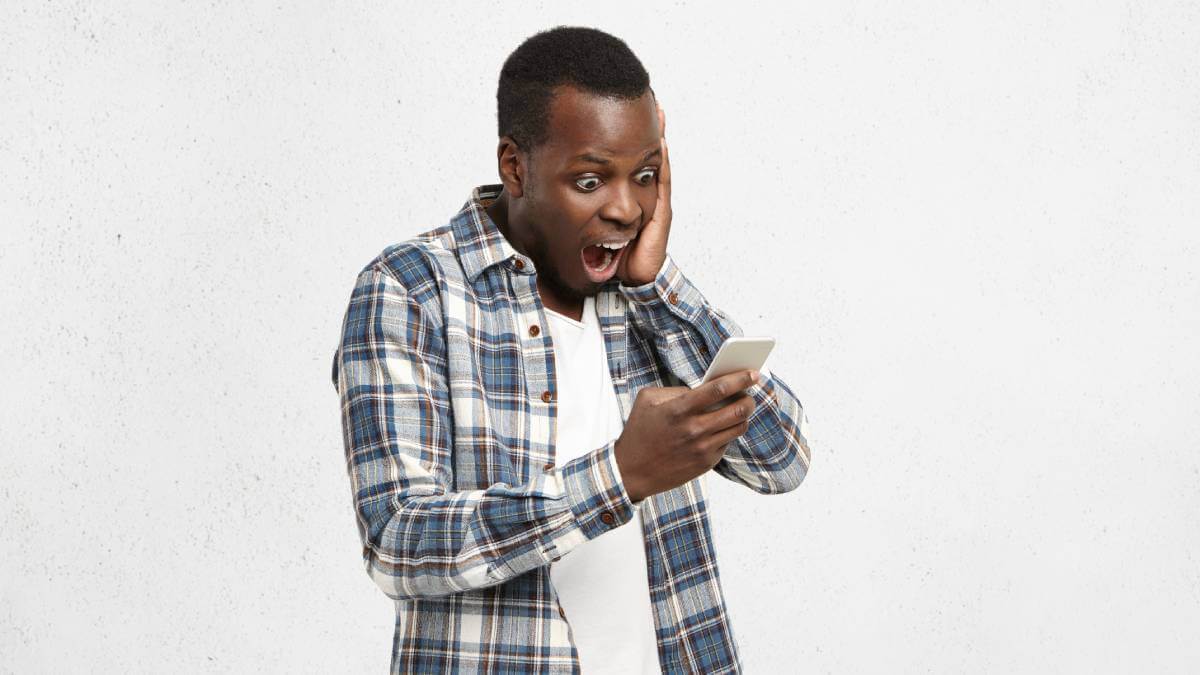 South African consumers are not big fans of their telecoms service providers.

That is according to the latest South African Telecommunications Sentiment Index, conducted by DataEQ (formerly BrandsEye) in partnership with Deloitte Africa, which reveals the telco industry ranked last in terms of consumer sentiment (-31.1%) for the second consecutive year, when compared to the banking (-7.5%), insurance (+1.4%) and food retail (+4.1%) industries.

The Index was conducted by tracking over 1.8 million social media mentions online of Cell C, MTN, Rain, Telkom SA and Vodacom between January 1 and December 31, 2021.

The sector performed badly despite attempts to augment network capacity with additional fiber and wireless deployments in 2021, with rolling blackouts – known locally as load shedding – one of the major setbacks.

"Amid increasing data traffic, telcos have battled for additional broadband spectrum. Load shedding has also had a devastating impact on the industry, pushing operational costs up at a time when margins were already under immense pressure," said Gill Hofmeyr, Africa TMT Industry Leader at Deloitte.

Data provided by load shedding tracking app EskomSePush confirms that load shedding was implemented on a total of 45 days in 2021. According to the Index, over half of these days also saw unusual volumes of network complaints as power issues impacted operators' towers and basestations. 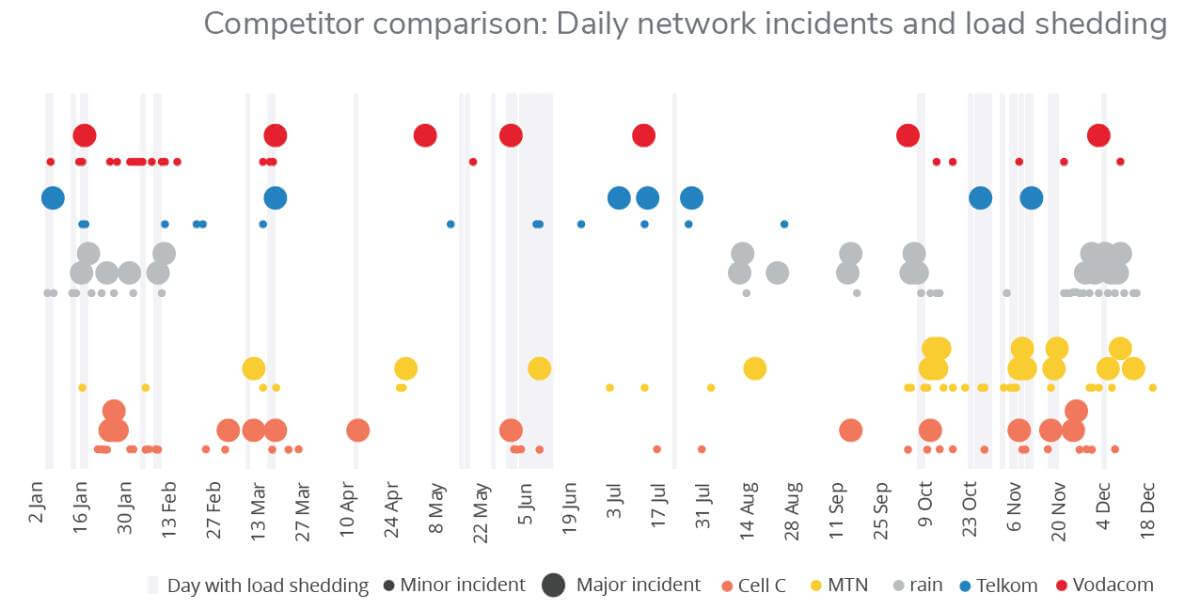 Source: South African Telecommunications Sentiment Index.
Click or tap for a larger version of the image.

In addition to impacting services and impairing reception, load shedding increases operational costs for telcos whose margins are already under immense pressure, the report found.

In this year's Index, MTN extended its lead by producing the largest year-on-year Net Sentiment improvement, while Rain's uptick was not enough to see a ranking shift.

The biggest improvement in both reputational and operational sentiment came from Telkom, which saw the partly state-owned telco climb the rankings to share second place with Vodacom. 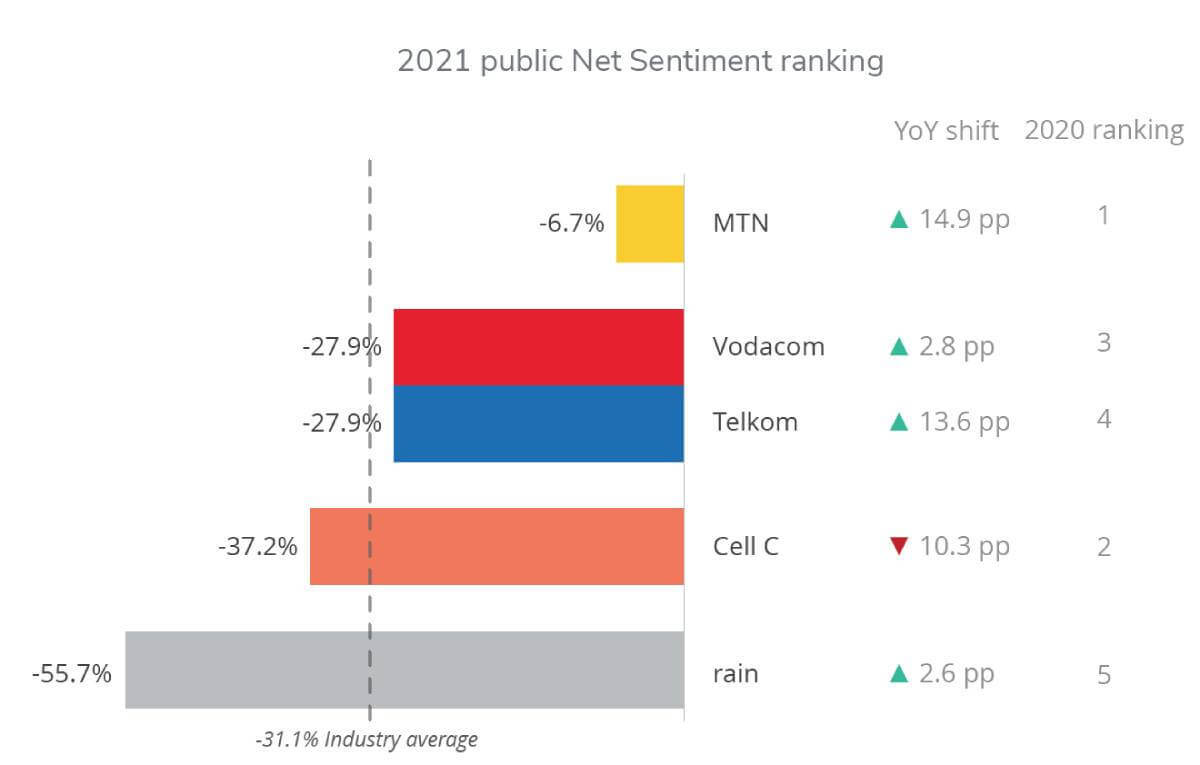 Bucking the trend, Cell C was the only provider whose Net Sentiment worsened in 2021, which saw the telco slide down one spot in the ranking.

Net Sentiment is calculated by subtracting the total volume of negative sentiment from positive sentiment, providing an aggregated real-time view of consumer opinion.

"Notwithstanding some successful brand and influencer campaigns, customer experience remained a major shortcoming across the industry, with consumer sentiment for this aspect worsening year on year," said DataEQ CEO, Nic Ray.

"Considering that telcos' efforts in 2021 did not translate into an improved customer experience when compared to 2020, this remains a key potential area for differentiation in the next few months or years," added Ray.

Vodacom was the only provider whose reputational Net Sentiment declined year on year, with the negative shift largely tied to a rise in reputational negativity related to Vodacom's pursuit of a telecoms license in Ethiopia.

The Index also identified which areas of social media conversation pose a potential risk to the telcos, whether this is from an operational, legal, regulatory or reputational perspective.

The report found that six in ten priority interactions on social media went unanswered by SA telcos. On average, South African telcos replied to 41.3% of priority conversations, with Cell C recording the highest response rate at 55.6%. The provider also saw the second-best response time, at an average of 2.4 hours.

The Index found that nearly two-thirds of social media complaints discussing another service channel spoke about call centers, pointing at poor telephonic customer experience being a significant source of complaints that spill over onto social media.