by Paula Gilbert, Editor, Connecting Africa 10/29/2019
Strong growth in Africa and the Middle East helped push up Orange Group revenue in the third quarter of 2019.

The strong results from the Middle East and Africa (MEA) helped offset a fall in France and Spain, Orange's two main markets. The MEA region continues to be a good growth region for the French operator which previously said it was confident it could maintain sales growth of 5% across the region. (See Africa & Middle East the Key 'Growth Driver' for Orange and Orange Keeps MEA Sales Growth Target at 5% as Focus Shifts.)

"The Group has confirmed its growth momentum during this third quarter, with revenues up 0.8% and EBITDAaL [earnings before interest, tax, depreciation and amortization after leases] improving 0.2% thanks to our excellent performance in Africa & Middle East and the resilience of the enterprise market. While competitive pressures are on the increase in Spain, in France they have somewhat abated and revenue would have increased had it not been for the impact of ePresse and audiobook offers," said Stéphane Richard, chairman and CEO of the Orange Group.

Continued strong growth in MEA was underpinned by the solid performance of retail services. On a comparable basis, Africa and the Middle East was the largest contributor to the Group's growth, accelerating revenues compared to the previous quarter thanks to a 10.2% increase in retail services.

The strong growth was driven by all countries in the region -- with the exception of Niger -- with eight out of 17 of the countries delivering double-digit growth, versus four countries the previous quarter. All the countries contributed to the revenue growth, including the Sonatel group (Senegal, Mali, Guinea, Guinea-Bissau and Sierra Leone) which rose 6.9% and Orange Côte dIvoire group (Côte dIvoire, Burkina Faso and Liberia), up 7.5% in the third quarter. 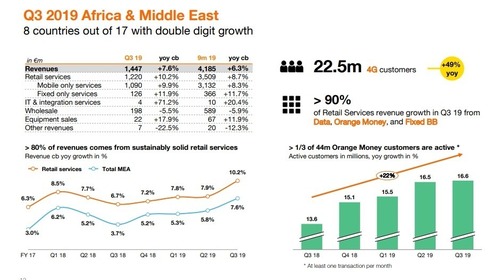 Source: Orange
The group now has 209.4 million mobile customers, an increase of 4.2%, driven by growth in the MEA region. The region had a total of 124.3 million customers at the end of September, up from 118.2 million a year ago, a 5.1% increase, while the region added 1.7 million new customers in just the last quarter.

"In mobile, Orange now has 65.3 million 4G customers, 22 million of whom are in Africa & Middle East," said Richard.

In Africa and the Middle East, the deployment of 4G led to a 49% increase in 4G customers year-on-year.

For its part, the active Orange Money customer base of 16.6 million grew 22% year on year, with revenues up 29%.

"The increase in revenues was also supported by the momentum of fixed services (up 11.9% in the third quarter) and, notably, by broadband services which now have 1.14 million customers. Wholesale revenues were down 5.5% in the third quarter (compared with a 7.5% decline in the second quarter), primarily taking into account the decline in the volume of direct incoming international traffic," the group said.