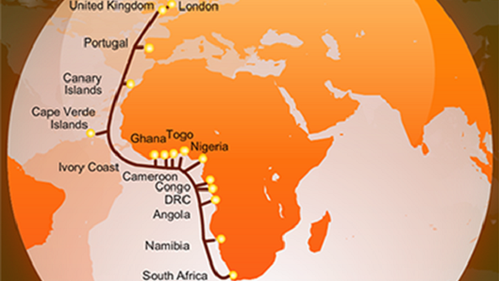 South Africa has been experiencing slow Internet speeds after two major undersea cables connecting the country to the global network were hit by separate failures.

The South Atlantic 3/West Africa (SAT3/WASC) submarine cable, which links Europe to South Africa, and a number of other West African countries along the way, suffered a break near Libreville, Gabon.

At the same time, the West Africa Cable System (WACS), which links South Africa to the UK, also saw an outage.

The simultaneous faults resulted in some South African Internet users experiencing very slow speeds since Thursday, including customers of Openserve, Axxess and Afrihost.

Telkom's wholesale division, Openserve, confirmed via email that some of its clients were experiencing reduced speed on international browsing due to the "unusual and simultaneous dual cable break." It said international voice calling and mobile roaming had also been impacted.

Openserve said it was liaising with both the WACS and SAT3/WASC undersea cable consortiums in order to determine the loss of service on both submarine cable systems.

"Through continuous liaison with the technical fault investigation teams of both cable consortiums, Openserve has ascertained that the SAT3/WASC break is in the Libreville, Gabon vicinity and that the WACS break point is in the vicinity of Luanda, Angola," it said.

"Openserve assures its clients and their respective customers that constant interface with the consortiums and their OEM partners will continue until both cable systems are up and running again."

The WACS cable lands in South Africa at Yzerfontein while the SAT3/WASC cable lands at Melkbosstrand, both located in the Western Cape.