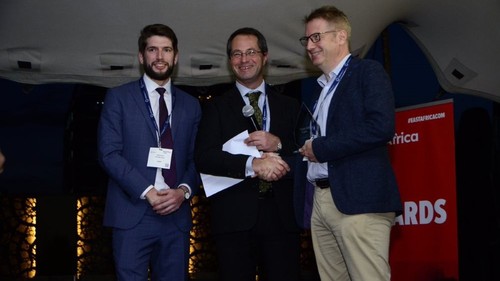 PRESS RELEASE -- NAIROBI -- Liquid Telecom was named as the winner in the Most Innovative Service category at East AfricaComs annual awards. The award recognises the partnership between Liquid Telecom and Africas largest non-profit civic technology network Code for Africa (CfA), which have installed air quality sensors to monitor air pollution throughout Kenya.

It is the first Internet of Things (IoT) hardware and software service designed and built in Kenya by CfA to use Liquid Telecoms IoT network. To date, sensors have been installed across Nairobi and Kisumu which provide measurements of airborne pollutants every 2.5 minutes.

Air Pollution in Africas fastest growing cities is a huge problem. In Kenya alone, it is estimated that air pollution is killing more than 20,000 people a year. Code for Africa has made the real-time data from the sensors available to citizens, journalists, researchers and regulators via a simple public dashboard and a website. By having access to real-time information, people can monitor the air quality and provide evidence of pollution to the authorities. They can also ensure that any promised solutions are actually implemented.

We are hugely excited by the potential applications of IoT in Africa and this project demonstrates the technologys true value in improving the quality of peoples lives. We are delighted our project with CfA has been recognised at this years East AfricaCom awards, said Ben Roberts, Chief Technology and Innovation Officer for Liquid Telecom.

The East AfricaCom Awards celebrate the achievements of the people and organisations improving connectivity, bridging the digital divide and accelerating digital transformation in East Africa.