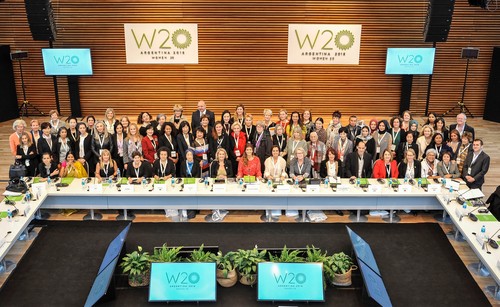 PRESS RELEASE -- After a year-long international dialogue process, Women 20 (W20), the official engagement group of the G20 that advocates for policies towards gender equality, submitted its recommendations to increase womens participation in economies and societies. The Final Communiqué was delivered to Heads of State, represented by the President of Argentina Mauricio Macri, during the W20 Summit held on October 1-3 in Buenos Aires. The document includes recommendations to implement policies in four areas of action: digital inclusion, labour inclusion, financial inclusion and rural development. As part of its role as Topic Chair of the Digital Inclusion Workstream, the GSMA led the discussion on the digital agenda, which is key to achieve Sustainable Development Goal #5: Gender Equality.

The GSMA is committed to increasing digital and financial inclusion for women, reflecting the fact that mobile is the primary way for people to access the internet in many parts of the world. The Communiqué places womens access to and use of digital technologies and the internet at the top of the call to action to ensure womens digital inclusion. It echoes many of the issues that GSMAs identifies as important for bridging this digital gender divide.

The Communiqué calls for the development of holistic and cross-sectoral policies that abolish the barriers to womens access and use of digital technologies, including affordability, safety, digital skills and availability of relevant content. It also includes a call for gender disaggregated data to inform evidence-based policies as well as initiatives to improve digital skills and boost womens participation in STEM (science, technology, engineering and mathematics) studies and industries.

The cross-cutting nature of digital inclusion was made clear during the W20 Summit; speakers pointed out that it was not only relevant by itself, but also essential for financial and labour inclusion, and for the development of rural women. Digitalization was one of the key topics at a panel on the future of work, which featured Mats Granryd, Director General, GSMA. Its imperative to include more women in the ICT industry, said Granryd in his remarks. We need all the good brains, not just 50 per cent of them.

The Business 20 (B20) Communiqué also highlighted that digital inclusion and addressing the digital gender divide is an enabler of a developed and inclusive future. The engagement group representing the voice of the private sector delivered its recommendations two days after W20, also in Buenos Aires. The B20 underlined the importance of accelerating investment in digital infrastructure, bridging digital skills gaps and facilitating free data flows for development.

The groups Communiqués will now be presented to G20 Heads of State at their Summit in December. Leaders are expected to act on these recommendations by developing implementation plans with timelines and targets, and to report publicly on outcomes.

Tech4Girls: Digital Inclusion for Girls
As a side event to the W20 Summit, GSMA hosted a Tech4Girls event where high school girls from Buenos Aires learned how to code a mobile app with social impact. The activity, part of the GSMAs global initiative Women4Tech, aims to inspire young women to pursue STEM education and careers. The event also featured talks by María Inés Baqué, Secretary of Digital Government and Technological Innovation at the Secretariat of Modernization of Argentina and Silvana Giudici, President of ENACOM (Argentinas National Communications Agency). Susana Balbo, Chair of W20, and Andrea Grobocopatel, President of FLOR Foundation were also present.

Giudicis speech stressed out the importance of empowering women to lead on everything they do. Do it for yourselves, but also as a collective effort to integrate more women into the digital world, she said.

Embrace technology, we need to see many more women working in tech fields, both in the private and public sectors, added Secretary Baqué.

Theres such a good energy here today. We must continue working so that there are more women in leadership roles, commented Grobocopatel. At the close of the event, Balbo looked back on all the work done by the W20 and said: This is a very nice way to finish the week of the Summit. Women can contribute a lot to technical organizations, and I hope you get the chance to do so if you desire it.