This is according to a new report by Boston Consulting Group (BCG) titled Five Strategies for Mobile-Payment Banking in Africa.

BCG estimates that the total value of global mobile financial services transactions is between $15 trillion and $20 trillion per year.

China has the highest utilization rate with 125% of its GDP transacted via mobile ­payments each year.

BCG explains that the figure is higher than 100% because it includes person-to-person transfers, such as money transfers among friends and within families, which are not included in GDP.

Although their smartphone penetration rates are lower, BCG found that Kenya and Ghana have the next-highest mobile payment rates.

In Kenya, transactions via mobile wallets and phones represent 87% of the country's GDP; in Ghana, they account for 82% of GDP. 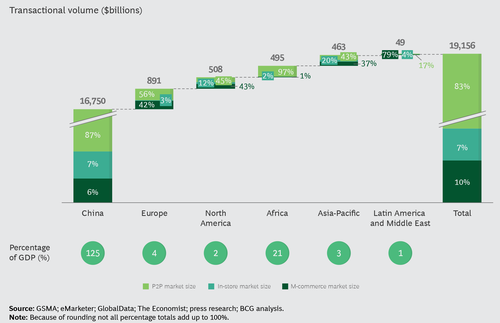 Although figures for mobile transactions are strong in Africa overall, they are not consistent across the continent.

"Kenya and Ghana, with their relatively mature mobile payments sectors, account for much of the business in Africa. In most other countries in the region, less than 50% of financial transactions occur through mobile payments," the report said.

Mobile money birthplace
The report's authors explain that Africa was the birthplace of the mobile wallet after Safaricom launched M-Pesa in 2007, but global momentum in the mobile payments space has since moved to China and other geographies.

Chinese services like Alipay and WeChat have developed their mobile wallets into digital ecosystems with billion-dollar valuations.

"This type of mobile payment innovation could find fertile ground when it returns to Africa," the report reads.

This tracks with ambitions of African telco giants MTN and Vodacom to launch similar "super-apps" for financial services.

"As African economies evolve, the mobile device will become the payment vehicle of first resort," the report said.

"Such mobile ecosystem solutions have been extremely successful in China and South East Asia. We believe Africa is the next foreground for exponential growth."

"The other key factor is customer awareness: Africans are increasingly likely to have mobile phones and are eager for services that contribute to a higher quality of life," Creemers added.

The report predicts that the ultimate size of the market across Africa could be as high as 850 million customers, supporting about $2.5 trillion to $3 trillion in transaction volume and $25 billion to $30 billion in yearly revenue from the financial transactions alone.

"Although many African banks have little direct experience with mobile payments, it represents a must-win opportunity for these institutions on the continent, because technology companies outside of Africa will capture the market if African banks fail to provide these services," BCG warns.