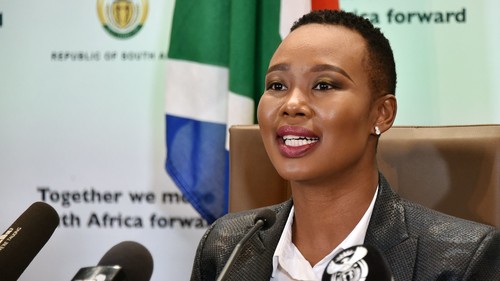 South African Minister of Communications and Digital Technologies Stella Ndabeni-Abrahams has been placed on special leave by SA President Cyril Ramaphosa for breaking COVID-19 lockdown rules in the country.

The Presidency said in a statement on Wednesday that Ndabeni-Abrahams had been placed on special leave for two months  one month of which will be unpaid.

The move comes after a picture went viral on social media of Ndabeni-Abrahams attending a luncheon at the house of a former ANC MP, despite the country being in the middle of a 21-day government enforced lockdown to curb the spread of the deadly COVID-19 virus.

Former SA Deputy Minister for Higher Education Mduduzi Manana, who resigned as an ANC MP in 2018, posted the picture of Ndabeni-Abrahams having lunch with a group of people at his house on Instagram – but later deleted it.

However, the photo was screen-grabbed by numerous people and caused an outcry on social media, with many South Africans complaining that Ndabeni-Abrahams did not seem to be following the same stringent lockdown rules that other citizens have been forced to abide by.

As of Wednesday morning, South Africa had 1,749 confirmed cases and 13 deaths, making it the country with the most cases on the African continent, although the country's death rate remains lower than some other African nations.

Ramaphosa reacts
After seeing the photo, President Ramaphosa summoned the minister to see him and "expressed his disapproval" of her actions, which he said "undermine the requirement that all citizens stay at home and save South Africa from the spread of the coronavirus."

The Presidency said in a statement on Wednesday that the President had reprimanded Ndabeni-Abrahams and directed her to deliver a public apology to the nation.

"The President accepted the Minister's apology for the violation but was unmoved by mitigating factors she tendered," the Presidency said.

During the "special leave," her department – which is responsible for telecommunication services – will be taken over by a minister in the Presidency, Jackson Mthembu.

"The nation-wide lockdown calls for absolute compliance on the part of all South Africans. Members of the National Executive carry a special responsibility in setting an example to South Africans, who are having to make great sacrifices," the President said.

"None of us  not least a member of the National Executive  should undermine our national effort to save lives in this very serious situation. I am satisfied that Minister Ndabeni-Abrahams appreciates the seriousness of what she has done and that no one is above the law," he added.

SA Minister of Communications and Digital Technologies, Stella Ndabeni-Abrahams, has been placed on special leave for two months. (Photo courtesy of GCIS)
Ndabeni-Abrahams apologizes
On Wednesday, Ndabeni-Abrahams made a public apology for violating the lockdown rules in a video posted on the government Facebook page.

"I regret the incident and I'm deeply sorry for my actions. I hope the President and you South Africans will find it in your hearts to forgive me," she said.

She said she would undertake to abide by the conditions of her forced leave.

"I wish to use this opportunity to reiterate the President's call for all of us to observe the lockdown rules. They are a necessary intervention to curb the spread of a virus that has devastated many nations," she added.

Ndabeni-Abrahams is not the only high-profile government official to misstep during the COVID-19 lockdowns happening all over the world.

New Zealand's health minister, Dr David Clark, was demoted earlier this week after he ignored national lockdown rules and drove his family to a beach 20km from his home.