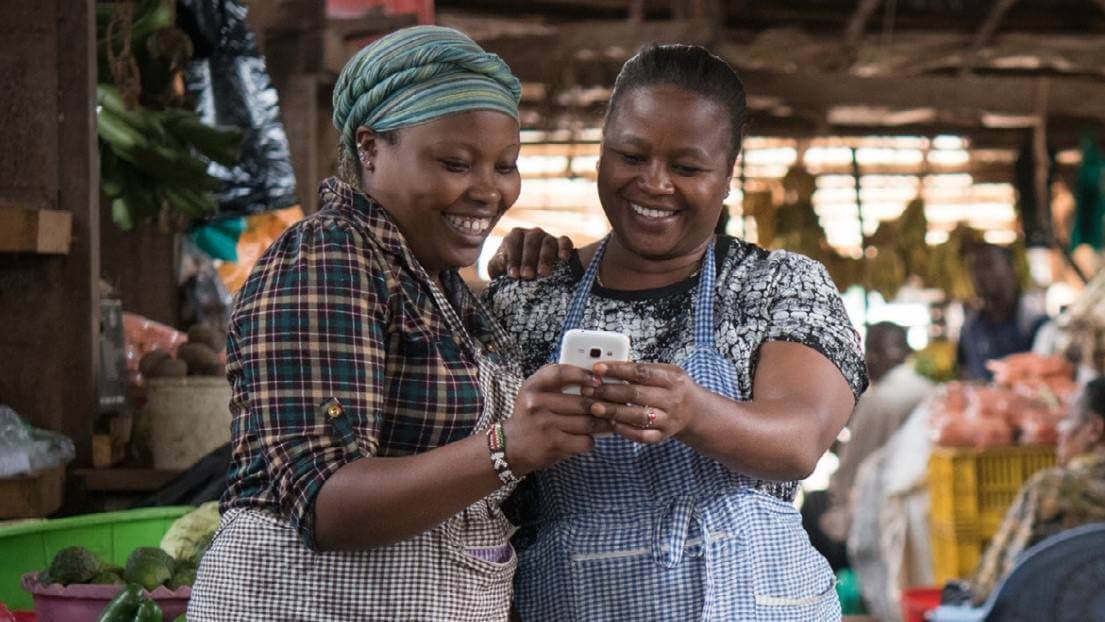 The average cost of 1GB of mobile broadband data has dropped significantly since 2015 in Africa, according to the 2020 Affordability Report from the Alliance for Affordable Internet (A4AI) and the Web Foundation.

"Over the last five years, the cost of 1GB of mobile broadband has dropped 60%, to 4.3% of average monthly income, as a simple average of the countries we study in Africa," Teddy Woodhouse, Web Foundation research manager for access and affordability, told Connecting Africa.

While Africa remains the region with the lowest average Affordability Drivers Index (ADI) score in the report, this year it saw the fastest improvement, a 6.7% increase since 2019. This came as countries improved planning, had better spectrum management and supported programs to narrow the digital gender gap.

The report's data comes from expert policy surveys conducted in 72 countries, almost all low- or middle-income, across the regions of Africa, Asia-Pacific, and Latin America and the Caribbean. Woodhouse said that the rate at which data prices have declined in Africa exceeds that in all the other regions.

"However, on average, Internet access remains less affordable in Africa than elsewhere. Africa also has the lowest rate of people using the Internet of any continent, at 29%," he said.

The report found that prices across all the regions are trending in the right direction. In fact, the average ADI score across the countries studied has risen by 13.6 points, from 42 to 55.6 since 2014, with improvements most notable in low-income countries.

"At a regional level, Africa has the lowest Internet penetration rates. As the global digital economy grows, the difference between being connected and being unconnected represents a competitive cliff edge in terms of economic development. We cannot let the digital divide replicate the inequalities that exist today," Woodhouse said.

Woodhouse said that some of the greatest progress this year has come from African countries.

"Rwanda is a clear success story. Five years ago the average Rwandan earner would have to spend around a fifth of their income for 1GB of data. Today 1GB costs around 3.4% of the average monthly income  a decline of 83% since 2015," he said.

Rwanda has also overtaken many of its neighbors, including Tanzania and Kenya. 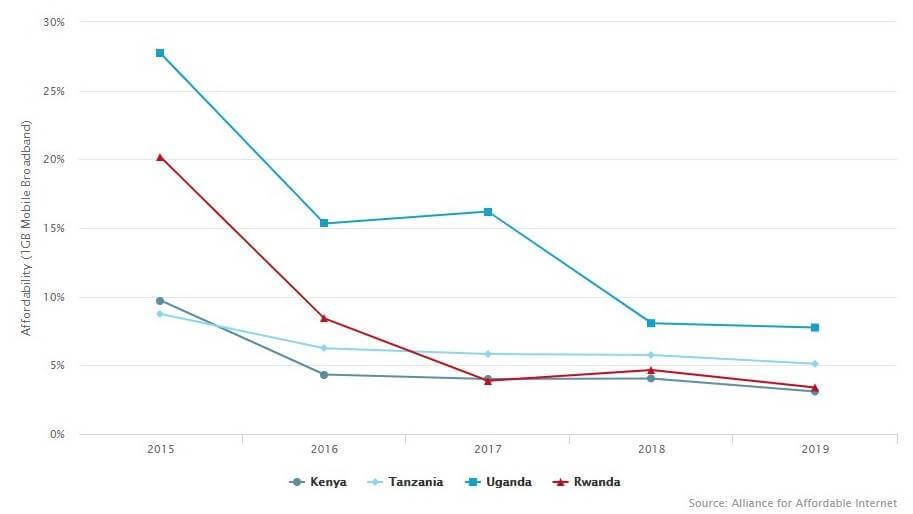 "While [Rwanda] doesn't yet meet the UN's affordability threshold [1GB for no more than 2% of average monthly income] costs are lower than the Africa regional average of 4.3% [among the countries studied]," he explained. "This is despite lower average incomes in the country, showing real progress in bringing down the price of Internet access."

"Affordable Internet makes possible programs like the cashless transition that Kigali's moto-taxis undertook this year. This only happens when the technology is ubiquitous enough that most consumers can use it," Woodhouse added. 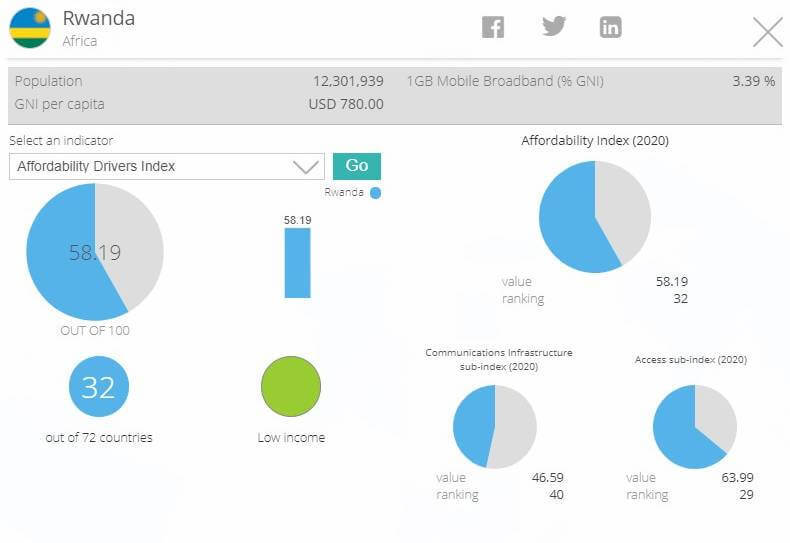 Malawi had one of the largest year-on-year score increases in ADI, rising by more than six points, a reflection of its work around the consultation and adoption of its 2019-23 national broadband strategy.

"In Kenya, greater transparency around spectrum allocations by posting information publicly, and substantial investments in international bandwidth with the country's fifth submarine cable landing, helped drive the country's score up 15% from 2019," Woodhouse said.

"Botswana makes one of the largest leaps in the ADI this year, moving up nine positions to 13th place. This is the closest a sub-Saharan African country has gotten to the top ten in the current model. In large part this leap was fueled by the adoption of a new broadband strategy in mid-2018." 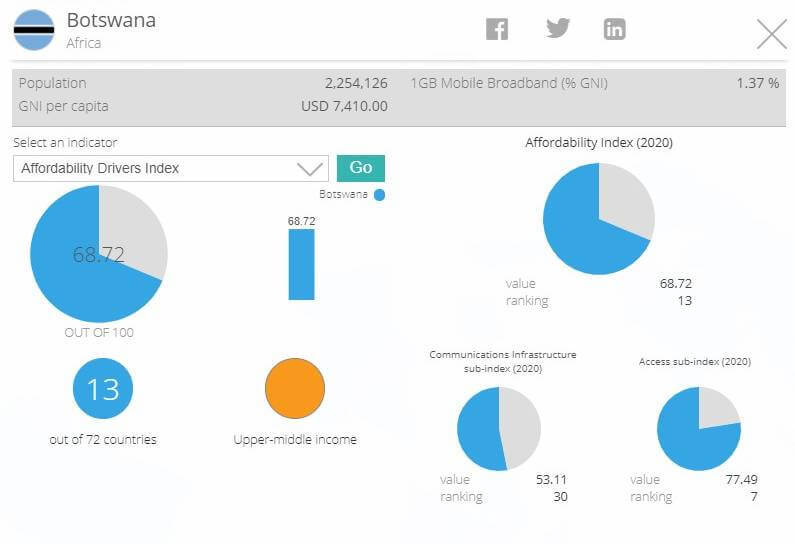 Meanwhile neighbor Namibia "has had its broadband planning process frustrated by a lack of clarity in the roles between the public and private sectors," the report said.

Namibia moved up modestly from having the second-worst score in Africa for broadband strategy to a score between the first and second lowest quartiles.

"In Namibia, the situation has been captured by the extensive governmental ownership of the two major network operators in the country. Here, the boundary between regulation in the public interest and in private financial interest for maximized profits have blurred," the report reads.

In Namibia the average affordability for 1GB exceeds 2% of average monthly income, rising up to nearly 14% for the poorest 20% of Namibians. 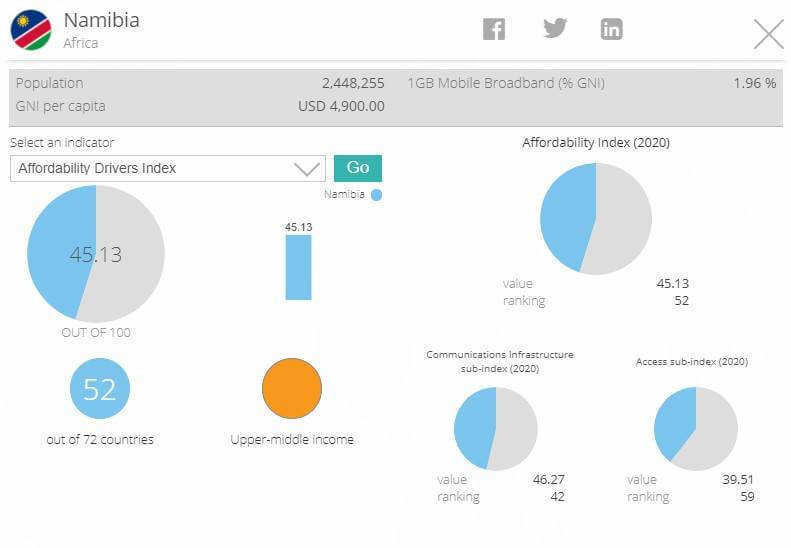 Unfortunately, when it comes to Internet access, Africa's gender gap is still significant and growing.

"Across Africa today, men are online at almost twice the rate of women, at 37% to 20%, according to the latest ITU data. While the access gender gap has narrowed or remained fairly constant in most regions since 2013, the gap in Africa has widened substantially," Woodhouse said.