Orange, GIZ Team Up on Digital Skills Development by Connecting Africa 12/17/2019
PARIS -- Alioune Ndiaye, CEO of Orange Africa and Middle East, and Kathinka Kurz, Head of the Development Partnerships Program with the private sector (develoPPP.de) at the Deutsche Gesellschaft für Internationale Zusammenarbeit (GIZ) GmbH, have signed a partnership agreement to develop the digital skills of 20.000 young people in 14 countries in the Africa and Middle East region. Orange and GIZ as two major institutions, one recognized for its expertise and know-how in the field of innovation, the other recognized by its experience and expertise in supporting the economic and social development of partner countries, will work hand in hand to train young people in digital skills, improve their employability and thus help reduce unemployment. Both parties join forces and bundle their competences and resources, with a financial contribution of 20 million Euro by Orange, and up to 10 million Euro by GIZ. This partnership will have a long-lasting impact on the economic perspective of young people.

In the context of the project GIZ acts as implementation partner for the German Federal Ministry for Economic Cooperation and Development (BMZ), who has set up the develoPPP.de program to foster the involvement of the private sector at the point where business opportunities and development policy initiatives overlap.

Orange and GIZ will establish digital hubs in Africa and the Middle East  Orange Digital Centers (ODC). These centers offer young people training in digital technology free of charge, they accelerate the creation of start-ups and support project leaders. The ODCs will feature digital state-of-the-art equipment. The teams will work with various stakeholders and the entrepreneurial ecosystem of each country to train young people and support in finding jobs. The ODCs will also work with universities in the regions.

Each of these 4 programs is aimed at a specific audience. The Coding School, a free access technology center that offers training, events and support for developers, geeks and project ideas. The FabLab Solidaire, a digital manufacturing workshop for creating and prototyping with digital equipments, also targets young people without diplomas and without jobs. The FabLab Solidaire of the ODC is part of the worldwide network of 88 FabLabs Solidaires belonging to the Orange Foundation.

Orange Fab and Orange Digital Ventures Africa are programs that target entrepreneurs. The first is a start-up accelerator that supports the most promising start-ups in their commercial development and also helps them to build business partnerships with the Orange Group and the worldwide network of 17 Orange Fabs. The second, Orange Digital Ventures Africa, is a 50 million euro investment fund that finances innovative start-ups in countries on the African continent and in the Middle East region.

The Orange Digital Center aims to create synergies between all these programs.

The aim of this partnership between Orange and GIZ is to make digital a chance for everyone. 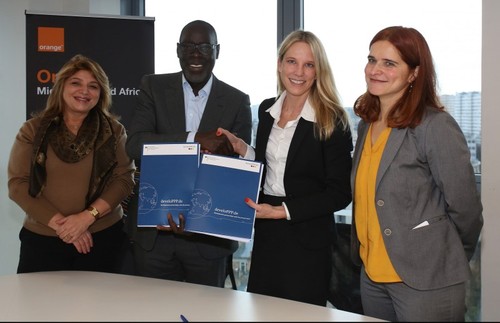 Orange and GIZ form strategic alliance to enhance digital employability of 20,000 young people in Africa and the Middle East.

Orange is present in 19 countries in Africa and the Middle East and has nearly 125 million customers as of October 30, 2019. With sales of  5.2 billion in 2018, this zone is a strategic priority for the Group. Orange Money, its money transfer and mobile money service available in 18 countries, has 45 million customers. Orange, a multi-service operator, a leading partner in digital transformation, brings its know-how to support the development of new digital services in Africa and the Middle East.