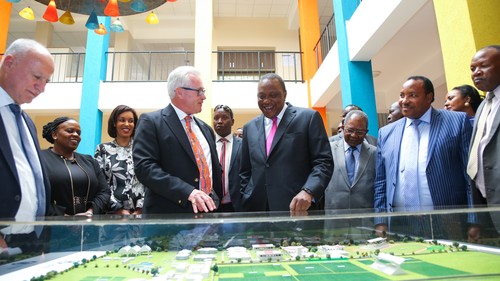 The state of the art institution which is located on a 100 acre piece of land in Mangú opened its doors to the first group of students in 2016. Currently there are 487 students admitted to the academy.

When we opened the doors to the first cohort of students, it marked the start of the M-PESA Foundations biggest programme, and probably the one closest to our hearts, said Michael Joseph, Chairman, M-PESA Foundation during the launch of the academy by H.E. President Uhuru Kenyatta.

When the idea to build this one-of-a-kind learning institution was mooted, the board and the trustees of the M-PESA Foundation were clear about the institution we wanted to establish. The thinking was that if Kenya hoped to nurture transformational leaders, then we must adopt an innovative approach to education, he said.

The admission process begins in March every year when the application forms are sent out across the country and ends in December when the final list of selected students is generated.

I thank M-PESA Foundation for giving a hope and future to thousands of young Kenyans making us believe that our past should not determine our future, said President Uhuru Kenyatta.

Every year the academy aims to admit up to four students per county who go through rigorous selection process which includes a multiple stage evaluation process that entails telephone and in person interviews for selected applicants as well as home visits to verify information.

We believe in inclusion and our diversity is beyond cultural. We have within our student body children with special needs such as the mobility challenged and children with albinism. We are also planning to facilitate those who are challenged both audibly and visually, said Joseph.

Beyond preparing students to excel in KCSE, the M-PESA Foundation Academy has redesigned subjects taught so that they are delivered in diverse and excitable ways. It has equipped the students with skills and knowledge to seamlessly enter tertiary education or embark on their own business ventures.