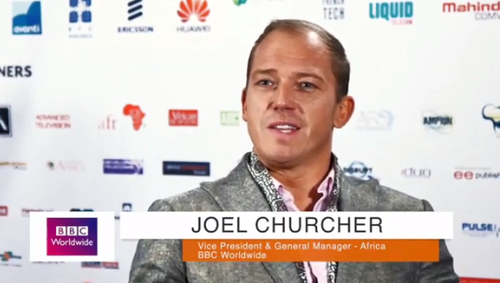 Connecting Africa has been actively tracking the digital entertainment explosion in Africa, heralded by the skyrocketing popularity of the smartphone -- admittedly amongst the more suburban, affluent classes.

Such developments have given rise to immense opportunities for those on the end of the telecom value chain in Africa, such as international broadcasters, where a whole new client base has opened up.

The commercial arm to the BBC, BBC Worldwide is a case in point and it has seen its mission in Africa fully realized as the number of digital connections grows on the continent.

At this year's AfricaCom panel discussion on economic development through digital connectivity, BBC Worldwide's vice president and general manager for Africa, Joel Churcher, sat down with AfricaCom TV to talk about African connectivity and how it is helping to succeed in its mission as not only a premium content distributor but also as a local skills enabler.

Speaking about some of the challenges and the contradictory nature of the entertainment space in Africa, Churcher noted that the people of Africa "have great expectations [and] demand quality service, quality content -- they want access to an international perspective and it's a real challenge to give them that when they just don't have access to broadband."

BBC Worldwide is a distributor of some of broadcaster's most prominent and celebrated shows and has even produced local versions of the famed Bake Off and Strictly Come Dancing shows.

But its remit is much broader: Its mission in Africa comprises three pillars. "Our first pillar is to deliver our global brands to the world, our second is to deliver premium content globally and our third pillar is digital innovation," lays out Churcher.

Connectivity has completely transformed BBC Worldwide's business within the past two years, where originally its "TV sales business was predominantly to free-to-air," now digital is its number one client base. Churcher states: "There are new players coming up all the time and they look to the BBC, in terms of content, because they know the audience is there. There is a great resonance with international content, particularly BBC content -- through its affinity, through its international perspective [and] through its 'premiumness'."

In respect to what BBC Wordwide is able to offer African viewers, Churcher believes: "People look to the BBC because of its heritage here in Africa, as a partner that not only offers credibility but also offers something that can help people upskill, develop staff and really make an impact on the continent."

You can view the full interview here:

If you're interested in Africa's digital evolution, then why not attend one of Connecting Africa's series of events?