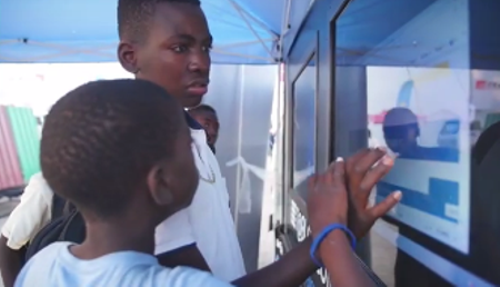 Fibre-to-the-home (FTTH) connectivity is picking up and the pace of 3G and 4G network rollouts has been accelerating but there's still a long way to go to get Africa's Internet penetration levels up the the global average. (See Africas FTTH Boom is Here: Report and Africa Nears 1B Mobile Subs Landmark, Says Ovum.)

The figures also indicated there were 146.6 million Facebook users across Africa as of the end of June 2016, compared with 1.53 billion across the rest of the world.

There are, of course, a number of initiatives aiming to improve Africa's digital connectivity. The latest is a Mozambican technology start-up company Kamaleon, which has developed a shared platform called the Community Tablet ('Tablet Comunitário'). It is a "solar-powered mobile computer with touch screen displays and virtual keyboards built in on a trailer to provide Internet access to remote areas," according to Kamaleon.

The company, which only launched in November, says it "aims to promote digital inclusion and a knowledge-based society in Africa," starting in Mozambique, which has "an astounding 24 million people with no Internet connection," notes the startup. "Kamaleon is on a mission to close the digital divide and empower more people in Africa to engage in the digital economy and its educational benefits," it adds.