When considering e-commerce most people think Amazon, Takealot or Jumia, multi-product online shops where you can buy – or sell – anything. Yet across Africa, a new generation of startups are active in this sector, developing solutions that strive to put the "e" into traditional, bricks-and-mortar commerce.

A good example of one is Morocco's Chari, a business-to-business (B2B) e-commerce app allowing traditional proximity store owners to order anything they need for their stores and get it delivered in less than 24 hours. The startup is active in Morocco and Tunisia.

Founded in January 2020 by husband and wife Ismael and Sophia Belkhayat, former consultants at Boston Consulting Group and McKinsey respectively, Chari is addressing a huge market, and providing a potentially game-changing solution by applying tech to a traditional industry.

"There are around 300,000 traditional grocery stores in Morocco and Tunisia, that can be defined by their proximity to their clients, the exclusive use of cash to pay and be paid, and their ability to get their procurement independently without going through central purchasing bodies," Ismael Belkhayat said.

"Some of these stores are big enough to be visited by the vans of fast-moving consumer goods (FMCG) companies, on average twice a month, and buy whatever they need from the salesperson sitting next to the van driver. But the great majority of them are too small to be visited and are left aside."

This leaves such store owners with no other choice but to temporarily close their shop, as they are usually one-man-bands, and go to the closest souk or cash-and-carry to buy what they need, or go to a wholesaler.

"Sophia and I realized that all of the guys behind the counters of these small shops are today using smartphones. This is how we came up with the idea of providing them with an app that would allow them to get the best products at the best price, delivered to their doorstep in 24 hours, with an invoice and a price known in advance, with no surprises," he said.

There were teething problems to begin with, however.

"First, we developed an MVP [Minimum Viable Product] that was using recent libraries. When we went to install it on the phones of our first clients, we realized they had very old Android phones and our app couldn't work on it. We had to rebuild it to work with old phones," Belkhayat explained. 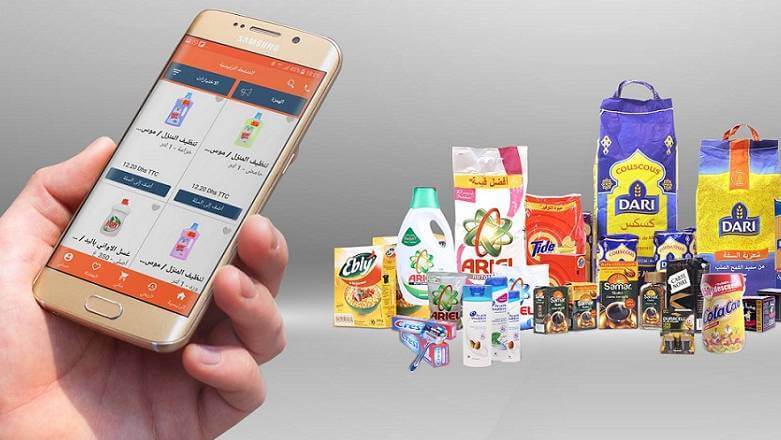 The Chari app at work.
(Source: Chari)
"Then we realized that many of these clients had large fingers and couldn't click on the nice-looking icons we designed on the app. Besides, many of them are illiterate, and can't read small texts. We had to rethink and come up with the simplest app ever."

Chari first released that app in Casablanca, and within a year had a 50% penetration rate, with 10,000 of 20,000 proximity stores in the city using its platform. It then expanded its coverage to other cities in Morocco, and then to Tunisia.

"We have put in place a call center as a client service in order for the clients who use our service for the first time to call us and get used to the features of the app. We also receive a lot of orders through WhatsApp. Usually the first orders are taken with the help of our client service team and then the users become more and more independent, he said.

Chari has no plans to slow down. Its impressive traction gained it acceptance into the renowned Silicon Valley-based Y Combinator accelerator, and it subsequently secured a US$5.2 million funding round from a stellar cast of investors that includes Plug n Play, Orange Ventures, Rocket Internet and Airbnb Angels.

It used some of that capital to acquire credit book and ledger app Karny, which has more than 50,000 active users. This added a fintech level to Chari's offering, but Ismael said key to the deal was Karny's ability to build Chari's user base.

"The cost of acquisition of a user on Karny is much lower than the one of Chari. We focus our marketing efforts on Karny and then convince Karny users to start using Chari," he said.

The startup is now preparing for a US$25 million Series A funding round, and plans to expand operations into other French-speaking African countries such as Senegal, Ivory Coast and Cameroon.

Belkhayat said Jumia has played a big role in clearing a path for companies like Chari to thrive.

"In French-speaking Africa, the B2C e-commerce is doing really well thanks to Jumia's efforts to educate the market. They have a solid marketing budget and spend a lot on TV ads to acquire more and more offline users," he said. "B2B e-commerce is benefiting from these efforts."

The size of the opportunity is significant. Belkhayat said grocery stores are buying an average of US$100,000 worth of stock per day, and with 200,000 such shops in Morocco alone – that's a total addressable market of US$7.3 billion.

"So far, less than 1% goes through digital. There is still a lot to do," he said.

Securing uptake is getting easier, as the penetration rate of smartphones and 4G increases, and the population – and store owners – become more tech-savvy.

"They already know how to use the mainstream apps such as WhatsApp, YouTube, TikTok  They are more and more open to start ordering online," said Belkhayat.

Chari has multiple revenue streams, with the startup getting a margin on each product sold through its app, running marketing campaigns on behalf of big brands, and monetizing insights around sales and customer behavior. It is also increasingly moving into the fintech space, as evidenced by the Karny acquisition.

Want to know more about African startups and new innovations on the continent? Check out our Innovation Hub here on Connecting Africa.
This is the latest example of a startup bidding to combine e-commerce and fintech and the startup thinks there is a lot to be gained from doing so.

"E-commerce margins are usually very low. The distribution margins offered by the manufacturers barely cover the logistic costs. Therefore, e-commerce apps have to find additional revenue streams to become profitable. The natural ones are coming from fintech. First, through micro credits and payment terms, and then through additional financial services such as remittances, domestic money transfers, bill payment, mobile top ups, and e-government services," he said.

The future is looking bright for Chari as it builds on its strong early start with funding in the bank and a fintech-focused plan for the future.