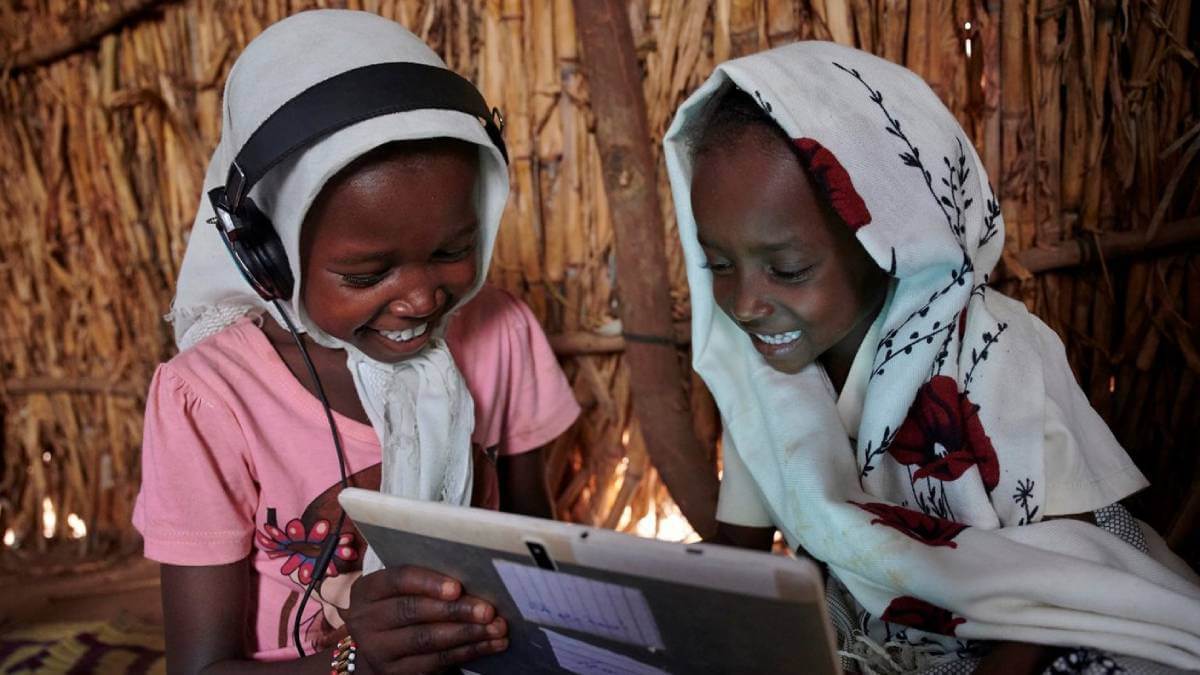 The vast majority of African children and young people do not have access to the Internet at home.

In Eastern and Southern Africa only 13% of children and young people have Internet access at home, and in West and Central Africa access is even lower at 5%. In the Middle East and North Africa only 25% of the youth have home Internet.

This is according to a recent joint report from UNICEF and the International Telecommunication Union (ITU) titled How Many Children and Youth Have Internet Access at Home? The report found that overall two thirds of the world's school-age children  or 1.3 billion children aged three to 17 years old  do not have an Internet connection in their homes.

Percentage of children and young people with Internet access at home, by region 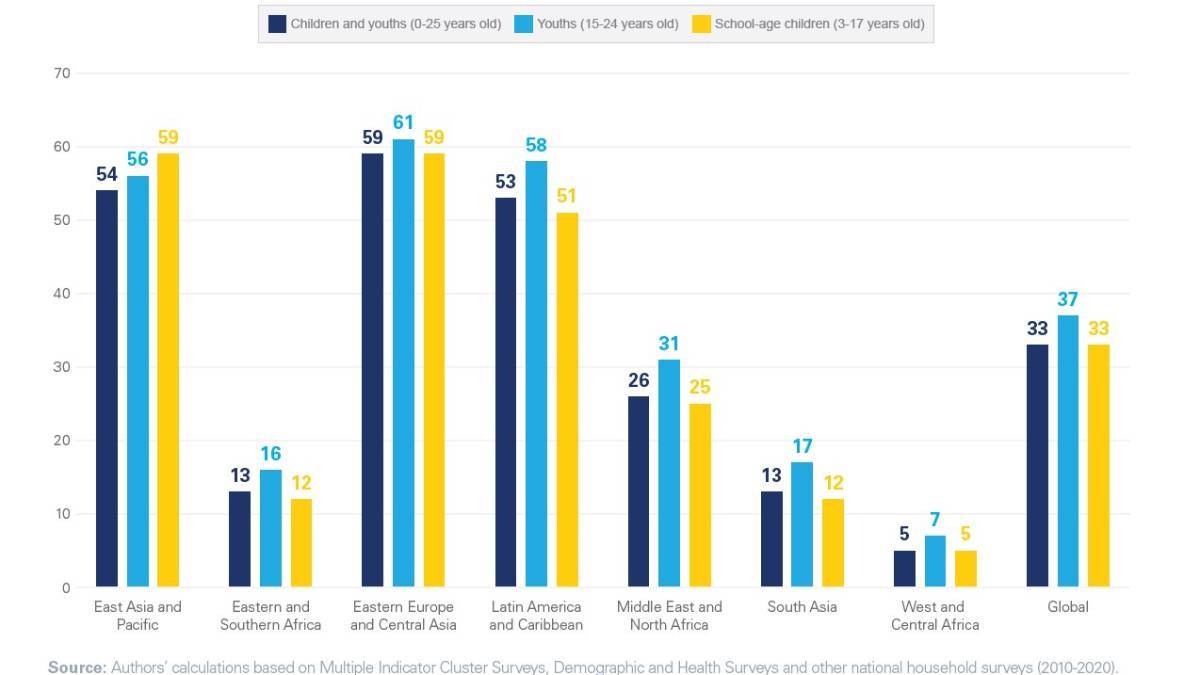 Using the latest available household survey data, the report finds significant inequities between countries, regions, wealth groups and urban-rural settings. Differences are starker yet between rich and poor countries, with only 6% of children and young people in low-income countries having Internet access compared to 87% in high-income countries.

Percentage of children and young people with Internet access at home, by country income group 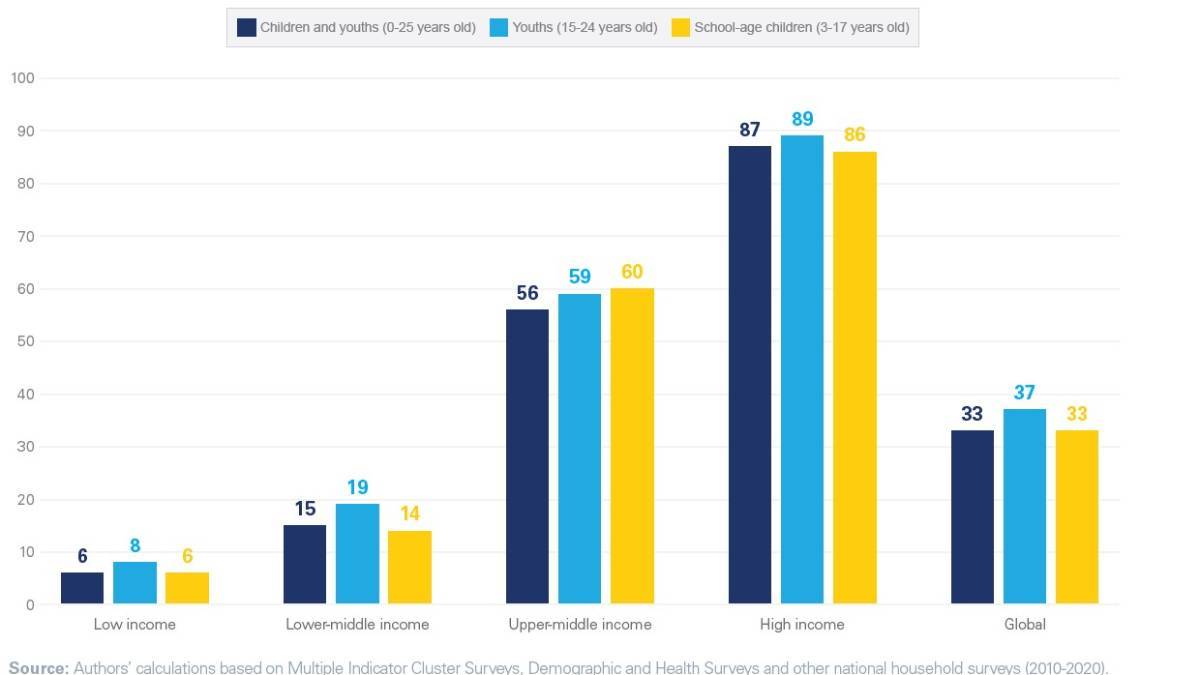 "That so many children and young people have no Internet at home is more than a digital gap  it is a digital canyon," said Henrietta Fore, UNICEF Executive Director.

"Lack of connectivity doesn't just limit children and young people's ability to connect online. It prevents them from competing in the modern economy. It isolates them from the world. And in the event of school closures, such as those currently experienced by millions due to COVID-19, it causes them to lose out on education. Put bluntly: Lack of Internet access is costing the next generation their futures."

Online learning remains increasingly important in 2021 as the COVID-19 pandemic continues to grip the globe and millions of children are unable to attend regular school.

At the height of nationwide lockdowns in 2020, up to 1.6 billion children were affected by school closures, what UNICEF calls "the largest mass disruption of education in modern history."

"Yet, even before schools shuttered their doors, one in five school-age children (3 to 17 years old) was out of school, and even children in schools were not necessarily learning, with 617 million children and adolescents worldwide failing to reach minimum proficiency levels in reading and mathematics," the authors of the report said.

Nearly a quarter of a billion students worldwide are still affected by COVID-19 school closures, forcing hundreds of millions of students to rely on virtual learning. The sad reality is that for those with no Internet access, education could be out of reach in 2021. 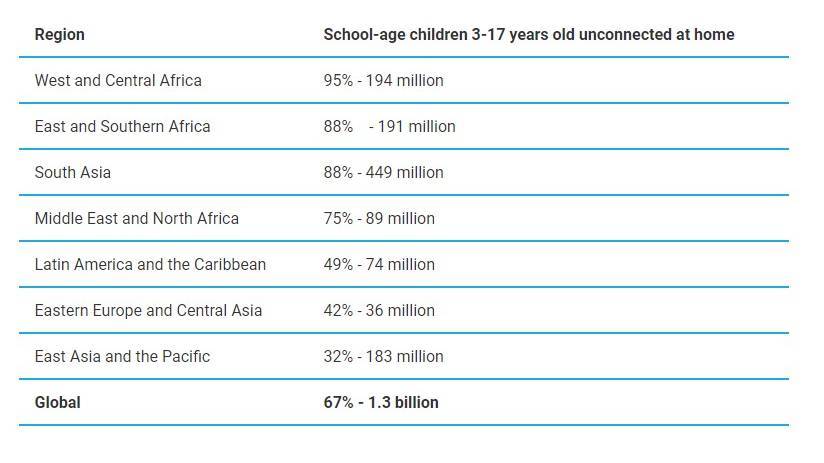 In 2019, UNICEF and ITU launched Giga, a global initiative to connect every school and its surrounding community to the Internet. Working with governments, Giga has now mapped over 800,000 schools in 30 countries.

*Top image: Children use a tablet at the UNICEF supported Debate e-Learning Center in a village on the outskirts of Kassala in Eastern Sudan. (Source: UNICEF/UNI232328/Noorani.) All graphics courtesy of UNICEF and ITU.