DR Congo: Is Reaganomics Coming to the Rescue? 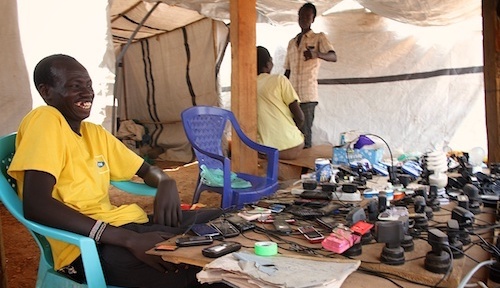 The Democratic Republic of Congo (DRC) has undergone rapid economic growth in recent years, and mobile penetration has increased fast. But the DRC's mobile adoption rate is still low compared with other sub-Saharan countries.

The GSM Association (GSMA) , which represents the global mobile industry, thinks the key obstacle is the total cost of mobile ownership (TCMO), including recurring payments for the service and the cost of a device spread across a 36-month period. It argues these costs are too high for income levels in the region. For example, the total cost to use 100 megabytes of data only (with no voice or text messages) equals 9% of average monthly income. That is above the affordability threshold of 5% as calculated by the United Nations, says the GSMA.

A main driver of the high TCMO is tax and regulatory fees, according to the GSMA's report. Its research indicates that taxes and fees account for 31% of total mobile revenues, including 17% levied specifically on the sector. Customers are required to pay customs duties on phones and SIM cards, value-added tax on data and voice calls and excise duty on using telecom services, for example.

The list of taxes and fees that mobile operators need to pay is much longer, and includes corporation taxes, social security payments, interconnection taxes, licensing fees and more. Indeed, of the 31% of mobile revenues that are paid in taxes and other fees, mobile operator payments account for about 24%. Were the DRC government to reduce taxes by at least one half, the total number of mobile users would grow by 2.8 million over the next five years, with tax receipts increasing by $21 million annually during the same period, the GSMA predicts. 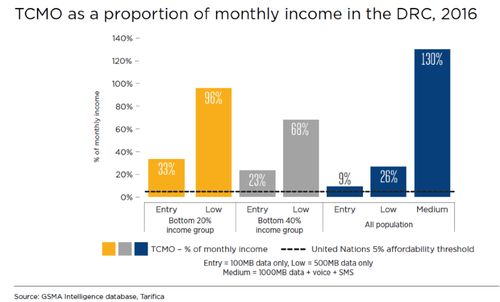 The rationale is that when taxes are reduced operators have more capital to invest in new networks, and TCMO falls. That allows more people to use mobile phones and the mobile Internet, generating more business and enlarging the tax base. Even with a lower tax rate, the government ends up better off, says the GSMA.

This may not all be wishful thinking. The most famous implementation of this economic logic took place during Ronald Reagan's presidency, hence the term Reaganomics. It has been credited with taking the US economy out of stagflation and into an era of fast GDP growth and low unemployment. Despite a reduction in both income tax and capital gains tax, overall tax revenues grew by 20% annually between 1981 and 1990 on a constant dollar basis.

But Reaganomics needs several things to go right at the same time. For a start, the benefits of reduced business taxes must be passed onto consumers. The more competitive the market is, the more likely this may happen. Encouragingly, the DRC's mobile market is in rather good competitive shape. According to research by Ovum, at the end of 2017 Vodacom served just over a third of the total market of 34 million mobile subscribers, with Orange and Airtel each claiming about a quarter and Africell in a not-too-distant fourth place. In this instance, a healthy competitive environment is likely to ensure that operators pass on the benefits of lower taxes to their customers. 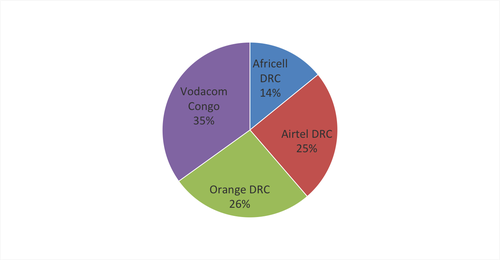 Secondly, the government needs to be patient. The year after Reagan's tax-cutting bill was signed into law (the Economic Recovery Tax Act of 1981), tax revenues fell sharply, with critics ridiculing the policy as voodoo economics. And tax income only reverted to growth two years later. So even if the DRC government listened to the GSMA's advice, it should not expect tax receipts to increase immediately.

But the most important condition is a generally stable political environment and a relatively fair marketplace in which business and consumer confidence can grow. On the political front, a presidential election in the DRC looms toward the end of this year. Economically, the DRC disproportionately relies on mineral exports, and mining companies enjoy preferential tax treatment. This could impede the development of individual and family businesses in non-mining sectors even if the cost of mobile ownership does fall. As a result, what limited growth there is in the tax collection base would be insufficient to compensate for lower tax rates.

The GSMA has clearly raised an important topic for the governments of developing markets to consider. Lowering tax rates on the mobile industry may not necessarily reduce the government's overall tax income. But if tax revenues are to grow, a number of other important pieces will have to fall into place.