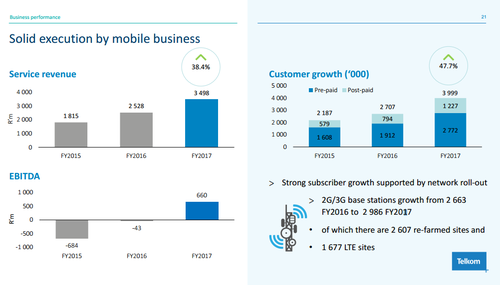 South Africa's multi-service national operator Telkom has reported a near 10% increase in operating revenues and a 12.4% increase in earnings for its full financial year, citing mobile and ICT services sales growth as the key contributors.

The operator, which has 4 million mobile customers, 3 million fixed-line customers and 1 million broadband customers, reported full-year operating revenues for the year to March 31 of 40.97 billion South African Rand (US$3.22 billion), up 9.8% compared with a year earlier, EBITDA flat year-on-year at ZAR10.9 billion ($830 million) and headline earnings per share up 12.4% to 731.4 cents.

Its enterprise ICT service division, called BCX, delivered a 70.5% year-on-year increase in revenues to ZAR7.55 billion ($576 million), though this significant leap is due in part to Telkom SA Ltd. (NYSE/Johannesburg: TKG) being able to report a full year of BCX revenues, compared with only seven months in the previous year following the acquisition of Business Connections in 2015.

Of course, the operator has had to invest heavily to meet the needs of its customers: Telkom's capex hit ZAR8.65 billion ($681 million) in the full financial year, up 43.3% from the previous year and equal to 21.1% of group operating revenues (much higher than the telco industry average of around 13-15%).

Its key areas of investment make sense, though, as fiber rollout (access and backbone), radio access network, core network and OSS/BSS investments accounted for the majority of the spending, all of which will help to support future customer demand. 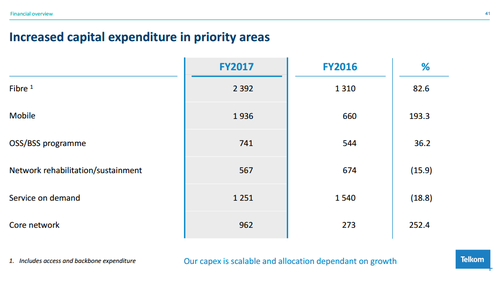