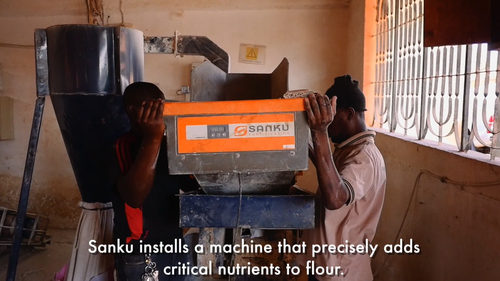 Vodafone has joined the continent-wide fight against malnutrition by teaming up with Sanku (Project Healthy Children) to help provide fortified flour to millions of people across Africa.

The mobile operator is providing its IoT SIM and USB Connect technology for installation at small flour mills across Africa, a move that will enable Sanku to help up to 3,000 mills become more efficient and also help to scale up Sanku's program. The first deployments of the IoT SIM and USB Connect technology are at flour mills in Tanzania and Rwanda, with other countries in Eastern and Southern Africa to follow.

Sanku has developed a technology, which it calls the "dosifier," that enables small African flour mills in rural areas to fortify flour with key nutrients during the milling process in a way that is sustainable and cost-effective. That's important because fortified flour helps to counter micronutrient malnutrition and aid the battle against micronutrient deficiencies such as birth defects, child development issues, and blindness.

"Our dosifier has been incredibly successful to date, bringing fortified flour to communities in need across the developing world," stated Sanku co-founder and CEO Felix Brooks-church. "Vodafone's IoT technology gives us the ability to significantly optimise and scale operations. Sanku currently helps provide fortified flour to around 1 million people and, with this new IoT connection, we are on a path to reach 100 million people by 2025."

With Vodafone on board, Sanku dosifiers "now have reliable, secure connectivity with Vodafones IoT SIM. Vodafone's in-country roaming reaches the most remote areas, allowing access to up-to-the-minute information on maintenance, power supply and machine tracking via GPS," according to the operator. In addition, Sanku can accurately monitor fortification levels to ensure communities are receiving the benefits of fortified flour, while Vodafone's M-Pesa mobile money service enables millers to make and receive payments on their smartphones.

Added Vodafone Group Enterprise CEO Brian Humphries: "Our project with Sanku is a perfect example of how the Internet of Things can improve people's lives and help make a difference in even the poorest of communities. Connected technology gives Sanku the ability to significantly enhance efficiencies, enabling fortified flour to be delivered to more communities, playing an important role in helping to end malnutrition."

For more on what Sanku is doing, see the video below: