The OTTs Are Eating Our Lunch  Challenging the Traditional Telco Mindset by Chris Read, Contributing Editor 2/15/2017 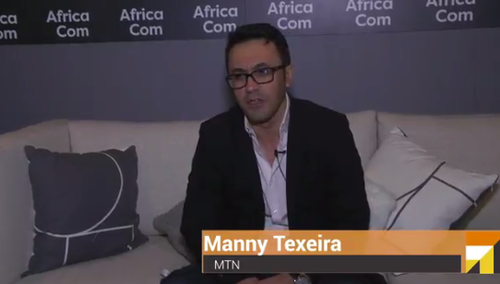 And this is coming from a telco -- one of the most prominent ones on the African continent too, with over 233 million customers. MTN's group head of digital services, Manny Teixeira, sat down with AfricaCom TV to discuss the role of African telcos in the digital era, how to build relationships with the startup community and what's in his crystal ball in terms of digital services predictions for the next two to three years.

Teixeira took part in the AfricaCom keynote panel discussion, "How to thrive as a digital telco in Africa." He noted that the key challenges drawn out from this discussion were how telco revenue streams are currently feeling the pressure as data is becoming increasingly seen as a utility, and the effects this is having on price points. Discussing how operators can participate in the broader digital ecosystem, Teixeira said: "The industry has collectively come to the realization that we can't do it ourselves anymore, we have now got to partner."

Expanding on the notion of data as a utility, Teixeira noted that traditionally telcos were "product houses and it was voice that was the product consumers bought, and we controlled the whole value chain around voice." He believes that, from the start, telcos tried to treat data in a similar fashion, yet "data is not the product, it's just an access layer." Instead, Teixeira says: "The product is the service, the content -- what people do with data," and there needs to be a more concerted move towards "the content and the services that we deliver over that data channel."

There has an ever increasing focus on operators offering digital content that is both attractive to consumers and financially viable for operators. Taking digital music as a case in point, Teixeira notes how MTN became one of the single largest digital music distributors in Africa which was "driven from a consumer need that we managed to identify and put a mechanism in place to deal with it." Such a service has been able to overcome the pervasive issues of lack of distribution methods and widespread music piracy in countries such as Nigeria, "on the back of our telco infrastructure network and our subscriber base, [which made it] viable for an artist to come directly to us, place their tune on our music platform and see revenue directly back  it was really about  how can we talk to the consumer given what we have -- monetization and distribution," says Teixeira.

Teixeira also spoke about the power of collaboration between mobile operators and startups in Africa at the AHUB powered by Ericsson. He notes that the relationship between startups and telcos is starting well and how APIs are working as an effective bridge between the two. Apart from its API developments, Teixeira said there is a lot of work being done internally at MTN "to address these journeys [and potential startup propositions] and we haven't got a proper structure in place yet, but we are very conscious of the need to do that and we are actively working towards that."

Talking about the main blockers to further cohesive relationships between startups and operators, Teixeira notes that these challenges mostly lie in the traditional telco mindset steeped in process and structure, as "telcos don't deal well with the unpredictable nature of startups, but as a telco we actually need it." Elaborating on this and the notion of OTTs eating the telcos' lunch, he explains that: "OTTs came from left field and they didn't need permission from anyone, they just did it. We need to bring a bit of that mojo into our thinking; it's about populating telcos with non telco people."

Taking a stab at what the future could hold for digital entertainment, Teixeira expects that the increasing use of smartphones on the continent will lead to more data utilization and subsequent local content production, from music to apps and gaming. "For us, as a global operator, we are looking for someone to deliver a global scale solution but with local execution and local players. It's about creating these local experiences throughout the region, we see a great role in fostering that," says Teixeira.

View the full interview below: