Africa & Middle East continues to be a growth region for the Orange Group, which on Thursday released its full-year results for the year ended December 31, 2019.

"I'd like to highlight that once again this year Africa & Middle East is one of the main growth drivers for the Group. We now have nearly 24 million 4G customers (+43%) and 18.2 million active Orange Money customers (+20%)," said Orange Group's chairman and CEO, Stéphane Richard, in the results statement.

The annual growth was also helped by a solid performance in Europe and a return to growth in the enterprise segment, up 1.4% and 1.0% respectively in 2019. Meanwhile there was a slight decline in France of 0.3% and a decline in Spain of 1.5% in 2019 "due to that market's shift towards low cost". 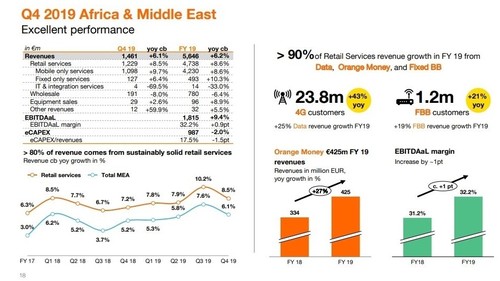