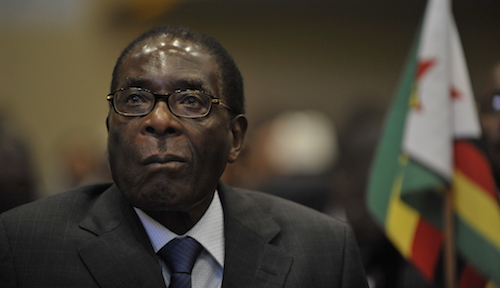 CAPE TOWN -- AfricaCom 2017 -- Several years ago at an ITU event in Geneva, Zimbabwean ruler Robert Mugabe popped up to give a typically demented speech attacking foreign governments for their violation of his country's airwaves. Ordinarily banned from traveling to Switzerland, Mugabe had taken advantage of a loophole allowing him to attend United Nations events. With its banks and lakeside views, Geneva was probably too good to resist. And he could indulge in some good old-fashioned anti-Western rhetoric while there.

Now pushing 94, Mugabe rarely makes it out of Zimbabwe these days. But his ICT minister, Supa Mandiwanzira, was on full display at this week's AfricaCom conference in Cape Town, South Africa. "There was a cabinet reshuffle and I survived so I am still in the middle of the action," he said to nervous laughter, referring to recent upheaval that saw the country's justice minister, previously touted as Mugabe's likely successor, lose his position.

Naturally, Mandiwanzira is just as unhappy with the West as his president is. But while Mugabe's telecom gripe had been with the governments of Western countries, the communications minister is miffed that Western companies, plus firms in Asia, are the ones profiting from all of the Zimbabwean government's investment in the ICT sector. "It is not benefiting African companies but companies out of Silicon Valley, India and Europe," he told conference attendees during a panel session this morning. "We are putting in infrastructure to buy software in Asia or the US."

Trying to figure out where Zimbabwe ranks on the quality of its communications infrastructure is no mean feat. Zimbabwe is hardly the most open nation on the planet, after all. And given its current economic malaise, it is unlikely to be one that any foreign investors are queuing up to enter. What is known is that two government-owned mobile operators -- Telecel and NetOne -- compete against one private-sector player in the form of Econet. Telecel was previously controlled by VEON, the emerging markets player formerly known as VimpelCom, but the Zimbabwean government acquired VEON's stake last year.

Of course, Mandiwanara makes all the right noises. The government has transformed the market thanks to the president's foresight in establishing a communications ministry in the first place. It remains the biggest investor in the country's technology sector, unsurprisingly, and is now pumping $98 million into expanding broadband networks into "all key parts of the country."

But what to do about those parasitic foreigners, which would seem to include just about all of the world's telecom vendors? Mandiwanara's big plan is to train Zimbabwe's youngsters in the dark arts of software, ensuring his country is beholden to the US, Asia and Europe no more.

"We must promote and encourage young people by making available resources so that they can commercialize projects at university level," he said. "We've created a fund and raised about $7 million to date, and that will identify projects and support them from a legal perspective."

Coming from any other authority, this would sound like a laudable goal. And a need to equip African youngsters with software skills is certainly on the minds of regulators in other African markets. "The [future] jobs are likely to be in software and services and the issue is to invest heavily in the quality of education and ensure children have data analytics and coding skills," said Miriam Altman, a commissioner with South Africa's National Planning Commission.

But any such efforts in Zimbabwe are bound to attract skepticism. According to a story in this week's edition of The Economist, Zimbabwe is close to "economic collapse," with the government running huge fiscal deficits and Zimbabweans anxious that hyperinflation is about to make a return. Before Zimbabwe adopted the US dollar about ten years ago, hyperinflation peaked at 500,000,000,000% in the country. A competitive software sector would be a godsend for many countries in the region, as artificial intelligence and automation technologies look poised to change the world. Sadly, Zimbabwe seems like an unlikely candidate to take the lead.