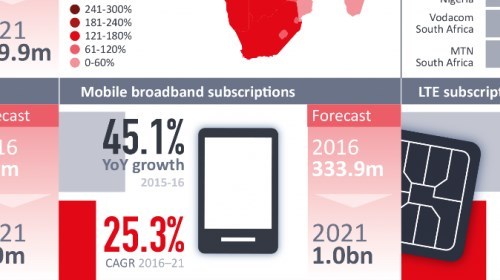 The number of mobile subscriptions in Africa is set to cross the 1 billion mark before the end of this year, according to research house Ovum.

The total number of activated cellular connections is set to reach 1.02 billion by the turn of the year and continue to grow: Matthew Reed, practice leader for Middle East and Africa at Ovum, believes the total will reach 1.33 billion by the end of 2021.

Following investments in 3G and 4G networks by network operators across Africa, and as smartphones become more affordable, data connections are set to drive the next phase of growth in Africa's telecom market. Ovum expects the number of mobile broadband (3G and 4G) subscriptions to hit 1 billion in 2021, with 4G accounting for more than 157 million connections.

This will, in turn, lead to an increase in data and digital service revenues for the operators: Non-SMS mobile data revenue in Africa is expected to rise from US$6.4 billion in 2015 to $27.56 billion in 2021, a compound annual growth rate of 27.6%, according to the research company's forecasts.

"As Africa nears the landmark of 1 billion mobile subscriptions, it is clear that the next phase of growth will be in broadband connections and in revenue from data access as well as from new 'digital services' such as digital media and mobile financial services," notes Reed. Despite this progress, Africa ranks second-lowest among world regions in terms of broadband development, according to Ovum's Broadband Development Index (BDI), which measures countries and world regions based on their adoption of high-speed broadband. Africa had a BDI score of 232 out of 1,000 at the end of 2015: only Central and Southern Asia had a lower score.

"Africa remains less advanced than most other world regions in its broadband development, and there is both an opportunity and a need to further improve connectivity on the continent, and to take advantage of the benefits that connectivity can bring," says Reed.